It’s becoming increasingly clear that Southampton have someone of interest at Braga.

The Premier League club scouted the Portuguese side in November and December, and have now made multiple trips to watch them in February.

Southampton had someone in attendance at the weekend as Braga beat Setubal 3-1, and were there again on Wednesday evening to watch the Europa League match against Rangers.

Braga lost 1-0 and were subsequently knocked out of the UEFA competition, having also lost 3-2 at Ibrox.

A Bola report Saints had someone there, along with many other clubs.

Just like at the weekend, Trincao was Braga’s best outfield player, although he’s already committed to Barcelona for next season. Unless there’s a loan idea, he can likely be counted out of the reckoning.

The other Braga player receiving plenty of attention this season is Ricardo Horta. In 40 appearances across all competitions, Horta has found the back of the net 18 times and 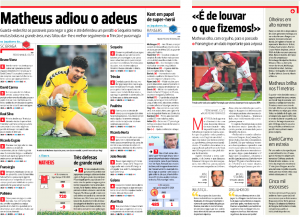 made a further seven assists.

Able to play on either wing, or even through the middle if required, the 25 year old was the subject of a Newcastle United attempt in January.

Horta has a €30m release clause, but will likely be available for less in the summer.