Fotomac report Galatasaray are set to make a move for Manchester City midfielder Fabian Delph as the Turkish club look to strengthen their squad for next season.

Galatasaray have already lost their two key midfield players this summer after Badou Ndiaye returned to Stoke City after his loan spell end and former Manchester City midfielder Fernando flew to Sevilla to complete his transfer there.

Subsequently the Turkish side are looking to sign at least two central midfielders and the Manchester City man is a prime target for them.

It’s reported Galatasaray are ‘increasing efforts’ to sign Delph and they’re looking to bring him to the Turk Telekom Arena for next season. Gala will be competing in the Champions League group stages in the upcoming campaign, as well as defending their Super Lig title. 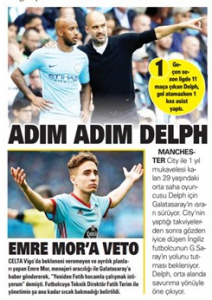 Delph could leave Manchester City in this transfer window to get more regular first-team football before Euro 2020. The arrivals of Angelino and Rodri at the Etihad are likely to have an impact on the England international and he may need to move on before the deadline.