Jonathan David left Gent for Lille in 2020 and went on to win the title in his debut season in France.

The striker’s development caught Liverpool’s attention in the summer window. He was ‘high on their list of potential candidates’, but the Reds decided not to make an approach. Jürgen Klopp’s side, however, haven’t forgotten about the player.

L’Equipe now explain many clubs are already following David, ‘including Liverpool, and for a while’. The Canada international’s contract expires in 2025, but he is ‘unlikely to stay at Lille next season for three reasons’.

The first one is down to the player’s ‘ambition’ to play in a more competitive team and league. The ‘time has already come to aim higher’ after the attacker proved himself in France in two seasons.

Lille must raise funds and David is the ‘most bankable player’, valued at €35m. This figure ‘could go up’ if they were to progress to the knockout stage of the Champions League. This is the second reason. 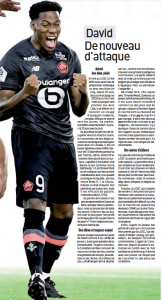 David’s agent has not been ‘paid certain commissions’ by Lille and there’s been in conflict for several weeks. The representative shares a good bond with his client and the latter is unlikely to risk staying at the club under these conditions.

The Canadian’s ‘ambition’, Lille’s financial needs and the agent’s conflict with the club are the ‘three reasons’ that could favour David to leave his current employer.

Liverpool are among the many clubs following David and it’ll be interesting to see whether they will make an approach for the Ligue 1 star next summer.