Home Europe ‘Impossible to say no’ – Neither player or club can turn down...
SHARE

Nicolo Barella and Manchester United is a rumour which Gazzetta dello Sport seem to like.

They keep wheeling it out with various claims about the midfielder being watched, and him being on the club’s potential signing list for the summer.

Inter Milan are presented as very keen on signing the 23 year old, but their struggles with FFP make matching Cagliari’s €50m asking price difficult, even in the next market.

Therefore, the idea would be a cash payment, presumably as low as possible, spread over several years, with ‘many young players’ thrown in as a balance.

Barella himself is said to look kindly towards a move to English football, which goes against some previous reports. 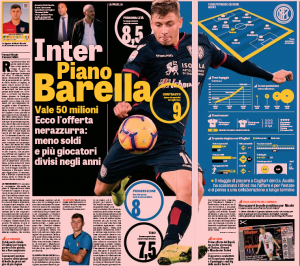 Manchester United are presented as being ‘very lively’ on the case, whatever that means, and it’s stated both player and club would find it ‘impossible to say no’ to Red Devils transfer advances.

That’s likely because, from Cagliari’s perspective, United represent a big chance to get that €50m.