Earlier on Wednesday we covered claims from Spanish newspaper AS that Real Betis are keen on Mikel Merino.

Athletic Club Bilbao interest was touched upon, as it always is, and Newcastle were ‘expected to negotiate with the clubs that intend to take the player’.

A potential transfer fee was put at €10m, which seemed remarkably low.

It’s not only AS.

Spanish newspaper ABC also has a big article on the possible transfer. It’s explained that whilst Betis haven’t opened formal talks to sign Merino, they have contacted his agents, Bahia International.

ABC say Betis will try to convince Merino with an ‘important salary’ and they’d also submit a ‘high offer’ to Newcastle. 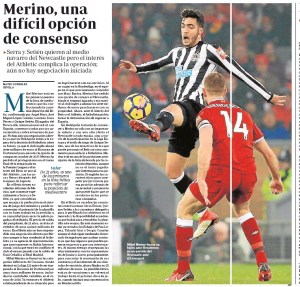 However, the Premier League club may disagree on what constitutes a big offer for the young Spaniard.

ABC go higher than AS, saying the starting price is ‘around €15m’, but it still doesn’t sound enough to make Rafael Benitez part with the player.

On top of money, it’s hoped Betis being able to provide European football and the style of the club’s game will be attractive.