Two days ago, we covered claims made by Mundo Deportivo that explained Everton and Southampton ‘follow’ Jean-Clair Todibo.

AC Milan, Bayer Leverkusen and AS Monaco are also looking at the 19-year-old, who has struggled for minutes with Ernesto Valverde’s side. Sky Italia reported the Serie A side are willing to pay €15m for him.

Saturday’s edition of Mundo Deportivo takes a look at these claims and they state the La Liga winners will need at least €25m to sanction the player’s sale and a repurchase option must be included as part of the deal.

Sky also reported an agreement could be found for a loan deal with obligation to make the move permanent, but Mundo states there isn’t any sort of an agreement for the 19-year-old.

Everton and Southampton are dragged into the mix again as the Catalan newspaper adds ‘important clubs’ like Carlo Ancelotti’s side and the Saints are ‘interested’ in Todibo.

However, no club has found an agreement with Barcelona so far. Those in charge at the Camp Nou believe Todibo’s market value can increase if he goes out on loan to play regularly at a club that has aspirations. 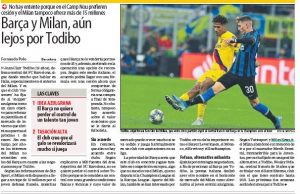 Even though Barcelona would prefer a loan move for Todibo, Mundo’s report suggests they are open to selling him (with repurchase option included), if they receive an offer of at least €25m.