Home Europe ‘Imminent’ – Player’s transfer ‘should be announced this week’ – Everton one...
SHARE

Things may finally be moving on the Andre Gomes front.

For a long time it felt almost a formality that Everton would make the midfielder’s loan permanent, with him enjoying a successful period since moving to Goodison Park from Barcelona.

Gomes didn’t settle at the Catalan club, struggling for chances and failing to impress when allowed on the pitch. The pressure from Barcelona’s local media was huge, and there were even claims some teammates were avoiding passing to the Portuguese footballer because he slowed down the play.

Clearly much happier at Everton, a stay makes sense.

There were claims around a month ago that Tottenham were set to complete the permanent signing, but that’s happened every transfer window since Gomes moved to Barcelona, with the Spurs rumour seemingly a force of habit. 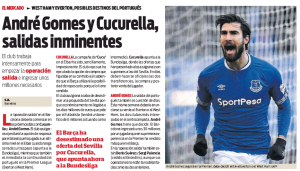 Wednesday’s edition of Sport reports Gomes’ Barca exit is ‘imminent’ and his new club ‘should be announced’ this week. That’s between Everton and the Hammers, with the Catalan newspaper not putting either in the lead.

Barcelona expect around €30m in ‘a matter of days’.