Emre Can committing to Juventus or the whole thing falling to pieces is ‘imminent’ report Tuttosport, with the weight of reporting showing a confidence that it will be the former of those scenarios rather than the latter.

Juventus have given a deadline to the Liverpool midfielder to finally commit to them and he’s only got a few days left until that expires. It would be no surprise if the deadline comes and goes without anything happening, but it’s being taken seriously by the media closest to Juventus.

Whilst there’s been reported interest from both Real Madrid and Bayern Munich, with Tuttosport covering that today, there doesn’t appear to be too much happening from the Spanish or German club. A pursuit of the Liverpool player isn’t being covered heavily in either Spain or Germany, and perhaps Can’s injury issues aren’t helping to attract other interest. 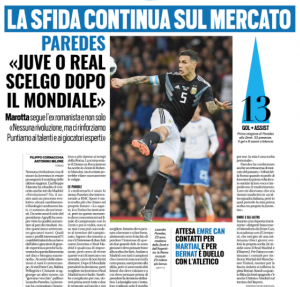 Tuttosport sound confident and expect movement soon, then once Can’s transfer is secured, Juventus will reportedly go after Anthony Martial and other targets.

Jurgen Klopp hasn’t publicly given up on Can staying at Liverpool, but that option isn’t taken seriously in Italy.

‘Keep your class and your cool’ – Player urged to stop...

Leeds United need to pay around €15m to get deal done...