Ever since the news of Aston Villa’s interest in Philippe Coutinho broke out earlier this week, there has been various claims on the deal to take the Barcelona player to England.

On December 6th, Sport stated the attacking midfielder has said ‘yes’ to the Premier League side and detailed the reasons for that.

Villa and the La Liga side are in talks for a loan transfer in the winter market, and Mundo Deportivo explained on Thursday Barca that want to include a mandatory purchase option.

Friday’s edition of Sport has a report titled: ‘Coutinho, imminent departure’. Within the report, it’s said the 29-year-old’s new destination will be Villa Park, if ‘nothing goes wrong’.

The newspaper further adds there is a possibility to close the operation today and it could mean the ‘final goodbye’ to Barca. 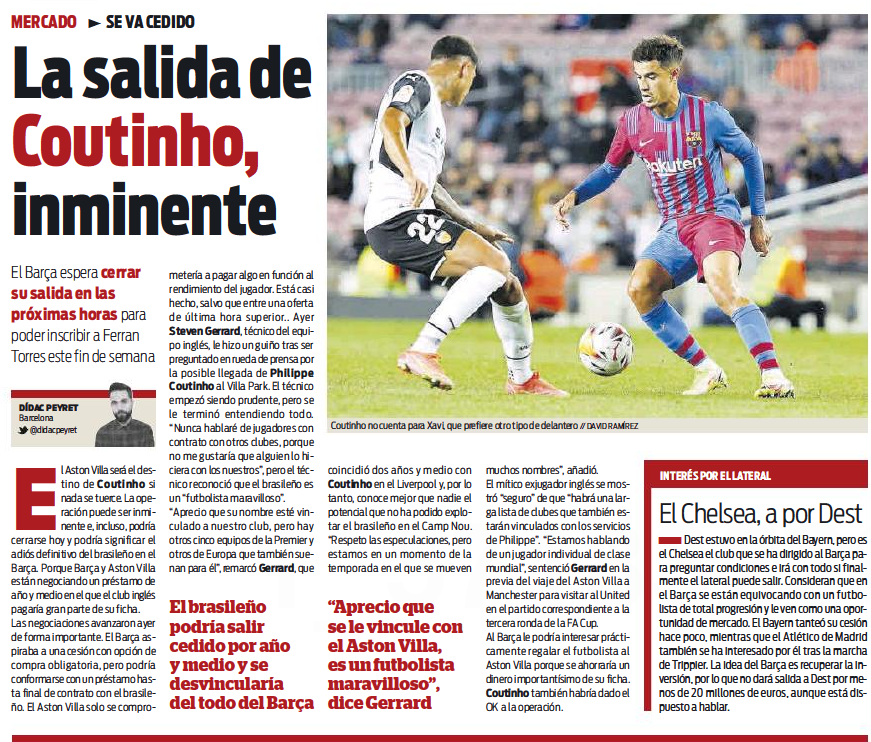 That’s because the Brazilian’s contract is until 2023 and both clubs are negotiating a loan deal for 18 months, with Steven Gerrard’s side set to pay ‘large part’ of Coutinho’s current salary.

Xavi Hernández’s side want a loan deal until the end of the season, with an inclusion of a mandatory clause to make the transfer permanent next summer. However, they could settle for a loan until the end of 2022/23 season since it allows them save a lot on the player’s high salary.

Coutinho has already said ‘yes’ to Villa and latter ‘would only commit’ to make his stay permanent based on performances.

Sport explain the ‘negotiations advanced yesterday in an important way’ and the deal is ‘almost done’, unless a ‘higher last-minute offer comes in’.