Jacob Maddox has completed a move to Portuguese club Vitória Guimarães, following his exit from Chelsea.

The player signed a four-year deal with the Liga NOS side, and his arrival in the league gets big coverage from the local media today.

Maddox may not have trophies for any first team, but his Uefa Youth League, U18 Premier League and FA Youth Cup titles are all highlighted by newspaper A Bola.

The outlet talks about the big potential the 21-year-old has, and reports that Vitória Guimarães acquired 60% of his rights. 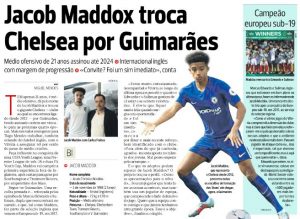 “I’m very excited. I followed Vitória over the last season and realised how Edwards and Suliman like to be here and feel valued. It’s obvious that I was very happy when this opportunity arose and it was an immediate yes,” said Maddox (via A Bola).

“In addition to what I already knew, I liked this bet on the talent of youngsters. I can’t wait to get started.

“I leave the introductions to the pitch… I’m a player who tries to make things happen, but I am also a team player, who understands the defensive side of the game. I want the team to count on me and that we have a great season together. That is the goal.”

Maddox had been at Chelsea since 2012, but never had a chance to make his debut for the club. He had loan spells at Cheltenham, Tranmere Rovers and Southampton, where he spent the last six months with the U18 squad.