Leeds United manager Marcelo Bielsa has heavily influenced many present coaches with his style of play and is likely to have an impact on future managers as well.

The 66-year-old started his coaching career in 1980, a decade before he landed his first stint as a manager of Newell’s Old Boys.

Since then, he has managed several clubs and national teams, including Argentina and Chile. During Bielsa’s six-year spell with La Albiceleste between 1998 and 2004, Javier Torrente was assistant to the current Leeds boss.

Torrente, who is currently managing Belgian side Beerschot, first became Bielsa’s assistant at Vélez Sársfield. The Argentine then followed his compatriot to Espanyol, Argentina and Marseille.

The 52-year-old has picked up a lot from working with the former Athletic Club Bilbao manager for years. However, Torrente has made it clear he doesn’t want to replicate Bielsa’s methods and explains his reasoning.

The Jupiler Pro League coach never played as a professional in his career, but got into management after initially starting as a physical trainer, assistant and then head coach. 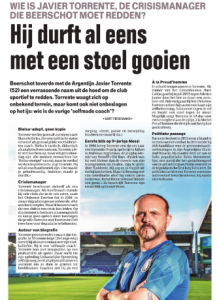 Although Torrente has stressed he won’t copy Bielsa, he has played a role in helping Chilean side Everton de Viña del Mar avoid relegation on two different occasions. He is confident of leading a club in ‘crisis’ and his expertise will be tested in his current role.

Beerschot are at the bottom of the table and he’ll have to use his past experience to help them climb up.