Home Europe “I’m ready to take on any challenge” – Player up for move...
SHARE

Aleix Garcia is on loan at FC Girona this season, one of Manchester City’s many players around Europe.

Things are going reasonably well. He’s not a nailed on starter by a long way, but he gets minutes, and recently put in a really good performance against Alaves, including scoring a goal.

The midfielder’s loan contract ends this summer, and he’s scheduled to go back to Manchester City, but he’d face a much tougher battle to get any time under manager Pep Guardiola.

With a contract with the new Premier League champions lasting until June 2020, a loan, maybe an extension too, looks likely to be the most obvious route for the 20 year old. 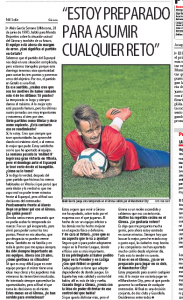 Speaking to Catalan newspaper Mundo Deportivo, Garcia has been asked if he’d like to return to his loan club next season: “It’s something that many people ask me, but now I’m focused on adding minutes.

“You always have to look for the best, but I’ve been very comfortable here, the city is very beautiful and my colleagues have given me a lot of love from the first day. All this I will keep in mind.”

Garcia was then asked if he feels he could return and play at his parent club: “I am ready to take on any challenge. Maybe it would cost me to play at Manchester City, but I know I can win the confidence of any coach. In the end it is a joint decision of two clubs and Guardiola. We’ll all decide.”