Home Premier League Liverpool “I’m not thinking about it at the moment” – Player quizzed about...
SHARE

Liverpool loanee Loris Karius has spoken at a pre-match press conference in Slovakia, ahead of Besiktas’ Europa League game clash with Slovan Bratislava.

The German is now in his second season with the Super Lig side after being loaned to them during the 2018 summer transfer window.

Star have reported on comments Karius made when asked whether he will be with the Turkish club next season, or whether he’ll be called back to Liverpool: “I’m not thinking about it at the moment. There’s still a long way to go before my loan spell ends. I am focusing on matches, my performances. We will talk about it at the end of the season.”

The 25 year old didn’t made a great start to his Besiktas career last season but managed to turn things around during the closing stages of the campaign.

His early season form led to claims he could be heading back to Liverpool and then be sent to the Bundesliga. However, he’s now established himself as first choice goalkeeper under Abdullah Avci and has started Besiktas’ opening four league games. 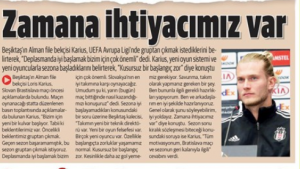 It seems he will have a decision to make over his future next summer as it’s unlikely he will want to provide back up to Allison.