Grandde N’Goyi’s stint at Leeds United was the beginning of the end of his professional career. Signing with great hope on loan from Palermo, the switch to Elland Road was all set to be made permanent as long as N’Goyi proved himself.

Unfortunately the midfielder was injured in one of his first training sessions with Leeds United, and having joined in January 2015 he couldn’t make his debut until the following April.

Unsurprisingly, Leeds United didn’t take up their option to sign the player, and he then moved on loan to Dijon but has since walked away from the higher levels of the game, despite being just 29 years of age.

Le Parisien have been speaking to N’Goyi after he made his debut for Sénart-Moissy, a regional French team with a ground capacity of just over 2000.

The French newspaper wanted to know how a player who’d not so long ago been at Leeds United and Palermo, and had come through PSG”s youth system, has ended up where he is: “It’s been two or three years that I do not play much professionally because of injuries. I did a test with Brest (Ligue 2) early in the season but because of the physical side, it didn’t happen.

“I had opportunities in distant countries but it didn’t bother me. I didn’t want to exile myself. I told myself that I was going to stop football and come back to my home in Savigny-le-Temple. And then, a month ago, the coach of Senart contacted me knowing that I was in the corner. And he was able to be convincing… Yes. He asked me if I was interested in helping out.”

Asked if returning to his Paris area home was more important than trying to continue his professional career, N’Goyi explained: “That’s exactly right. Since the age of 13 and my 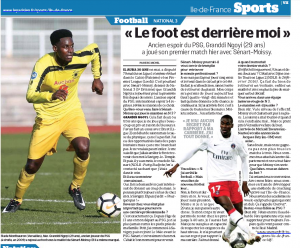 departure to PSG, I have never set foot near my family. When I was small, I started in Savigny then joined Le Mee before PSG. Senart, it’s really at home. It was the right time to come back.

“Football is behind me. I want to play without pressure. Even though I’m only 29, I moved on. If my body had allowed me to stay with the pros until I was 40, I would have done it. But I am no longer able to meet the requirements of the high level. I have no regrets about my career. I gave everything.”

It’s a sad story for the former Leeds United player, and yet he sounds quite content with the situation, probably tired of asking his body to do things it no longer can.