This summer was a busy one for West Bromwich Albion, who were keen to rebuild the squad for new manager Slaven Bilic.

No fewer than nine new players arrived at the Hawthorns, with four of those loan deals. One such player was Matheus Pereira.

The 23-year-old right-winger joined on a season-long loan deal from Sporting, with West Brom finally managing to secure his signature after issues over his work permit.

The midfielder has now spoken to Portuguese newspaper O Jogo about the move, and it seems he’s more than keen to get going in the West Midlands.

“I am very happy and motivated to take this step in my career,” he told the newspaper.

“I knew the size of the Championship, so of course I wanted to come here [England]. I am very grateful to the WBA for giving me this opportunity.”

Whether Pereira can take the opportunity remains to be seen. West Brom’s squad is packed with talent this season and particularly on the right-wing. 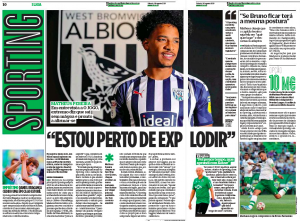 Grady Diangana is another who has arrived at the club this summer, while Chris Brunt and Oliver Burke were already there.

That’s a lot of competition for Pereira to fight with and he’ll have to hit the ground running to impress Slaven Bilic and become a first-team regular.