The 18-year-old had a chat with the outlet regarding his arrival at Arsenal, his quick impact at the club and his future in international football.

“The first day was very interesting. I took the photos at the club and went to lunch, it was a very big table. They came to talk to me and I didn’t even know how to answer”, Gabriel Martinelli told Estadão.

“Then I got changed and went to the gym. All the players were there and I thought: ‘It’s a dream to be here with football stars.”

“To speak with teammates, most of them know how to speak Spanish and I can manage some English. To give interviews, it’s more difficult. It’s undoubtedly one of the most difficult parts because I had never studied English.”

“My mom is here and makes the food I like. But I miss the rest of my family and friends very much. I have three sisters, two are married and one is still little, she’s 8 years old. She couldn’t come because she’s at school. I miss her, I used to see her every day, pick her up at school. But we always talk on the phone.” 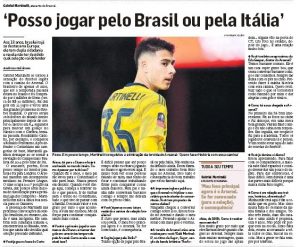 With 10 goals and four assists in 22 games, he’s the youngest players to score that many times in a single season. He says he takes advice from his parents so these stats don’t blow his mind.

“It’s hard to think that until recently I was playing for Ituano and now I’m here. It’s great to see these people talking about me, but I have to focus and keep working hard to achieve even greater things. My father and mother talk to me a lot and always keep my feet on the ground.”

Regarding his international career, Martinelli was asked if he thinks about wearing Brazil’s shirt in the future: “Of course I do, but I’m still young. My main focus now is Arsenal. If called, it’s a consequence”.

But he can’t affirm he’s playing for his home country, since his Italian citizenship may weigh on his decision: “I have the option to play for Brazil or Italy. I don’t have anything defined yet. I’m doing my job right here at Arsenal. This is all a consequence of the good work I am doing here”.

With the English press saying Arsenal would triple his salary in order to avoid the interest from other clubs, the youngster was asked if he’s received any offers so far.

“Nobody even talked to me about it. I’m focused on Arsenal and I’m doing my best. I intend to help Arsenal with more goals and victories.”