It’s not too unkind to say Jean-Kévin Augustin’s move to Leeds United was something of a disaster. Joining the Whites on loan from RB Leipzig in the winter transfer market, the 23-year-old went on to play a grand total of 48 minutes for Marcelo Bielsa’s side.

He didn’t make an appearance after February, and it quickly became clear Leeds wanted to back away from their option to sign the player permanently. According to the initial loan agreement with Leipzig, the move had to be made permanent if the Yorkshire club were promoted to the Premier League.

Leeds then argued that because a cut-off date was missed, due to the Covid-19 pandemic, the clause wasn’t valid. Leipzig, who didn’t want the player back, naturally disagreed and there was talk of court action.

That’s taken something of a back-burner, with Augustin signing for Nantes towards the end of the last window. He now wants to put all his issues behind him, and that includes what happened at Leeds, Leipzig, and controversies he’s faced with France’s youth sides.

L’Equipe state Augustin was held back by a serious hamstring injury with Leeds, and they 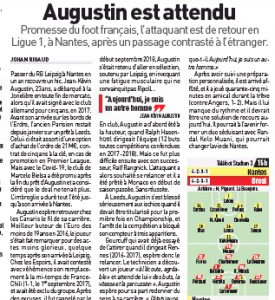 quote the player as saying “Today, I’m a different man”.

With plenty of time left to get his career going again, a fresh-start is welcomed, and the Elland Road nightmare, as well as all the player’s other issues, can be swept under the carpet.