Home Premier League Chelsea “200% sure he would have made it” – Academy manager regrets Chelsea...
SHARE

The name Charly Musonda Jr. doesn’t appear in the news as much as it once did, with the Belgian midfielder still recovering from knee surgery.

Contracted to Chelsea until 2022, the 24-year-old has been at Stamford Bridge since 2012 without every managing to break through.

Loans to Real Betis, Celtic and Vitesse failed to help him develop in the desired manner, while injuries have also hindered him throughout, leaving him with just seven appearances for the Blues in eight years.

It seems unlikely that he’ll go into Frank Lampard’s plans once he fully recovers from his latest setback, and there’s a general feeling a parting of ways would probably be best for both parties.

While no one knows what Musonda’s future will be made of, one man firmly believes he should have never left Anderlecht for Chelsea in the first place. 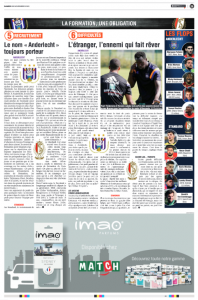 That is Jean Kindermans, the academy manager at the Belgian club, who explained as much to La Capitale over the weekend.

He said: “With him, I have the regret of not being able to convince him to stay. I’m 200% sure he would have made it with us. He was made for Parc Astrid, but he’s not the one who took the decision to leave. The whole family did”.

While many have left Anderlecht for the Premier League with great success, Musonda is not one of them.

Thankfully, he still has time on his side, and will be hoping to emulate the likes of Youri Tielemans and Romelu Lukaku over the next 10 years or so.