Everton star Richarlison was featured this weekend in a front page story from Argentine newspaper Olé, covering an interview in which he mainly talked about the rivalry between national teams, but also had some interesting things to say about his club career.

Olé were very direct when asking 24-year-old if he’d like to stay with the Toffees for a lot longer or if he plans to move to a bigger club. n his reply, the Brazilian made sure to insist he has huge respect for his current club.

“I’m always very careful when I talk about it. I have great affection for the people of Everton and for the club, who received me so well from the first day I arrived,” Richarlison told Olé.

“I don’t know what the future holds. If one day I have to go, it must be good for me, but also for the club. But if I stay, I’ll continue giving my life for this shirt and for the fans, who have always supported me and were with me at all times. I have enormous gratitude and feel at home when I’m at Finch Farm or Goodison Park.” 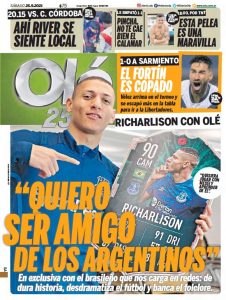 Richarlison was asked to name an Argentine player he’d like to play with. And following all the rumours about a move to Paris Saint Germain in the summer, and without any great surprise, the Brazilian says he’d like to be a teammate of Lionel Messi.

“Without a doubt, Messi. I’m a big fan of him. He’s a complete player and has become a benchmark for his quality and winning mentality. I’d love to have the experience of playing and learning a little from him.”

Richarlison also revealed some special affection for an Argentine side.

“Boca Juniors is a team that Brazilians love for the mystique they created in the Libertadores. I’ve liked them since when I was still a child. In addition, they have a fanatic crowd, which supports them all the time, and the club seems very connected with the more popular layers of Buenos Aires and Argentina. I ended up creating an identification with them for that.”

That’s why Olé comes up with a header saying ‘What if Roman calls him?’, as a reference to Boca Juniors vice-president Juan Roman Riquelme. Even though that’s only a joke for now, we all know those quotes will end up being part of a rumour in the future.