Earlier on Thursday, we covered a big story from Gazzetta dello Sport that claimed AS Roma and Arsenal could end up in talks for a (strongly hinted at) swap deal between Amadou Diawara and Lucas Torreira.

The situation was such the Italians wanted a big name midfielder to put alongside Jordan Veretout, with the Gunners man seen as the right man for that role.

While Diawara has done well under Paulo Fonseca, it was stated the Italians could be willing to sacrifice him to Arsenal in order to get the Uruguayan.

In turn, the London club appear to be looking for a more defensively sound midfielder, with the Guinea international ticking the boxes in that department.

However, Corriere dello Sport, who also cover Arsenal’s interest in Diawara on Thursday, pour cold water over the idea of a swap deal. 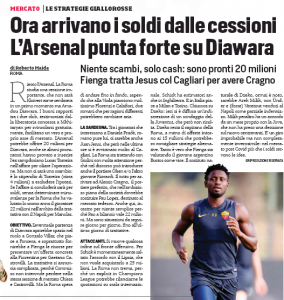 It’s said that while Mikel Arteta’s side ‘could offer €20m’ to sign the defensive midfielder, it’s certain ‘attorneys’ (read intermediaries) who have tried to insert Torreira in the deal.

The ‘hypothesis’ of a swap is ‘to be excluded’ because of the Uruguayan’s wages of €4m/year.

If a deal for Diawara is to be done between Roma and Arsenal, ‘it will be for funds without making losses’.

The Rome based club paid €22m for the player last summer, so it gives you an idea of what they’ll be wanting (Gazzetta’s article said €17m was what they valued him at).