Yohan Boli was one of a number of strikers who Fulham tried to sign on transfer deadline day, and it was another deal that failed.

On Thursday we brought a claim from Belgium explaining that Fulham had offered €3m plus bonuses to Sint-Truidense V.V. for the 23 year old.

The offer was knocked back, and Boli added to list of Sergi Enrich and Aboubakar Kamara as known Fulham deadline fails.

Friday’s copy of Het Belang Van Limburg has some quotes from Boli himself about the failed Fulham deal and he sounds like he’s got his head screwed on: “I’m not lying, I would love to play for a club like Fulham. But it was Tuesday I first heard of their interest. When I take a step, I want to discuss it calmly with my family, but there was not time. It all went very quickly.

“Therefore both STVV and I came to the conclusion that it was better to stay at Stayen. I’ve got a lot of work to do, if everything goes according to plan, that lucrative transfer will probably follow. And then both the club and I get better from there.” 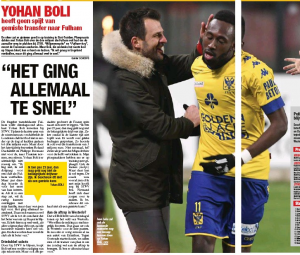 Boli is a young footballer who knows what he wants, and if Fulham had made an approach earlier it may have all ended very differently.

HBVL say Boli could have tripled his salary with Fulham, but still that wasn’t a great pulling factor for the player: “I’m only 23 years old, so money should not be the main driver. Especially because I wasn’t in top shape lately. There is talk about crazy amounts. I heard about a transfer fee of €3m. It’s not normal, right? Especially when you know that Mignolet left here for half. My teammates teased me at training. Also the coach.

“But I can handle it. The coach especially wanted to see if I’m at STVV with my head. No one needs to worry about that. I consider this story not as a missed opportunity.”

Fulham should probably keep an eye on Boli’s development in Belgium and then, if they’re still interested, make a move before August 31st.