Happy about being away from Goodison Park and Marco Silva, Nikola Vlasic doesn’t particularly want to return to Everton next season.

At least, that’s what the attacking midfielder hinted at in an interview with Gazzetta dello Sport ahead of CSKA Moscow’s clash against Roma in the Champions League.

Scoring the only goal in their 1-0 win over Real Madrid, the Croatian has already left his mark on this season’s competition, which he would have featured in had he stayed with Marco Silva.

Aside from the chance of featuring in the elite European competition, Vlasic gave the Italian newspaper the other reasons why he chose CSKA Moscow. 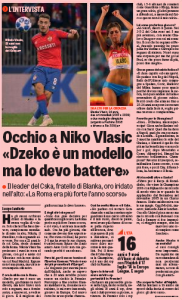 He said: “I spoke with the manager, Goncharenko, and he convinced me with his attacking football and the role he would give me, behind the striker. I’d have more chance to have the ball compared to at Everton, where you have to think about defending more, and where it’s harder for me to show my qualities.”

The Croatia international once again found the back of the net at the weekend, scoring one in a 2-0 away win to Anzhi Makhachkala, before coming off in the 77th minute.

This takes his tally to four goals and two assists in 10 appearances in all competitions, and the 21-year-old is hoping his performances attract the attention of some clubs, but preferably not in England.

He said: “In the future, I’d like to play in La Liga, which is very technical. It’s been the best over the past 10 years, where every club has to prove it can play.”

Vlasic feels this is different to the Premier League, and explained the style of football played by most clubs in England, including Everton, doesn’t suit him.