Ivan Rakitic swapped Sevilla for Barcelona in 2014, and moved back to his former club in September 2020.

During his time at the Camp Nou, the midfielder picked up a sackful of trophies. He won La Liga four times, the Copa del Rey also on four occasions, and managed one Champions League victory.

Barcelona let Rakitic sign for Sevilla for a nominal fee, happy to get his wages off their accounts and leave room for other players to come through. During the Croatian’s time with the Blaugrana, there were repeat suggestions in the Catalan media that he wasn’t entirely happy with how he was seen by those in charge at the club.

A lot of that was down to a failure to offer a bumper extension, yet there’s clearly no hard feelings from Rakitic himself.

Barcelona face Sevilla in the Copa del Rey on Wednesday evening, and Rakitic has granted AS a big interview ahead of the match.

Given Jesus Navas isn’t expected to be fit, Rakitic is set to captain his side, but he still won’t celebrate if finds the back of the net against Barca.

AS quote him as saying: “I wouldn’t celebrate a goal against Barcelona. I will always carry them with me. 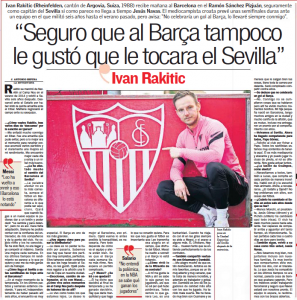 “Things that were discussed were not fulfilled with me, but there I have lived many beautiful moments. My little daughter was born in Barcelona, ​​I have many friends in the city and a lot of affection from the fans, which is mutual.”