For Philippe Coutinho, January 2018 signalled the end of a saga that dragged on six months longer than it should have, as the Brazilian finally got the transfer to Barcelona he wanted.

Blocked from leaving by Liverpool, who wanted to keep him for a season longer, the 25-year-old eventually transferred for around £110m last month, and he’s already made six appearances since.

Now happy and settled at the club, Coutinho decided it was time to give an interview to Mundo Deportivo about his first month or so at his new club.

Of course, amid all the Barcelona praise came the unenviable question about his battle to leave Anfield for Nou Camp last summer.

Asked about what his worst moment was, he said: “Last summer, when Barca’s offer arrived, I was very clear with everyone because I wanted to come here. In the end, it didn’t happen, and I had to work even harder when coming on the pitch so that the fans didn’t think I was being bad. 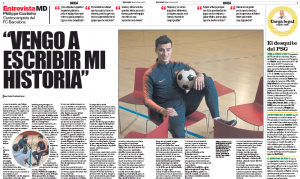 “It was tough, but I also want to say that I had good moments in Liverpool, the people treated me well, even if I didn’t have the chance to win a trophy. I’ll keep the good memories and now I’m at Barcelona to write my history here”.

Despite missing the first few games of the season because of “back trouble”, the former Liverpool star did help his old club out quite well, scoring seven goals and picking up seven assists in 14 league appearances prior to his move.

Furthermore, he helped them top their group in the Champions League, by scoring five goals in five games, as well as helping out with two assists.