Marcelo Bielsa will always be linked with taking over South American national teams, regardless of whether he’s in a job or not.

If he hadn’t taken on Leeds United this summer there’s a reasonable chance he’d now have taken up one of the opportunities which has been presented since the World Cup.

Chief among the options would be Argentina, who have been searching for a manager since Jorge Sampaoli was declared the fall-guy for World Cup failure.

Up a little in Central America, Bielsa has been repeatedly linked with the Mexico job. If he wasn’t at Leeds then it would look an ideal position for the Argentine, he’d have the type of players with energy to implement his plans.

Success at Leeds has made snatching him away almost impossible, but it’s also made the manager even more attractive.

Mundo Deportivo quote Cuauhtémoc Blanco, a former Mexico international described as ‘one of the most authoritative voices’ in Mexican football, as saying: “If you ask me, I would like Marcelo Bielsa to come.” 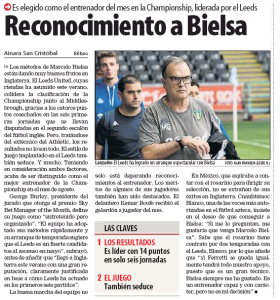 The Spanish newspaper says Blanco is aware Bielsa has two years of contract at Leeds, before adding a further quote:“Bielsa I have always liked. He is a capable coach with character, but it is not my decision.”

For Mexico to have any chance, then Leeds United’s manager would have to try and force his way out, and that seems a very unlikely scenario right now.