Perhaps one of the more surprising transfer decisions of the year, Florian Thauvin will be leaving Marseille for Tigres in Mexico.

The 28-year-old was a wanted man with his contract in the south of France running out at the end of the season, with the likes of Crystal Palace and West Ham interested in bringing him back to the Premier League.

Both the Eagles and the Hammers reportedly made contract offers to the right-winger, but the former Newcastle man decided to go to North America, where he will team up with his ex-partner in crime André-Pierre Gignac.

Playing in his last game at the Stade Vélodrome on Sunday, the forward wanted to go out with a bang, which he did as he helped his side win 3-2 as they qualified for a European competition.

After the game, he spoke to La Provence, who asked him about his decision to go to Tigres, which in turn meant turning down the Crystal Palace and West Ham offers.

Explaining it was a ‘difficult choice’ as Marseille had made him a ‘superb offer’, ‘superior’ to what he had, Thauvin made it clear that with the club starting a new era under Jorge Sampaoli, the fans needed ‘a player 100% committed’, which he wasn’t. 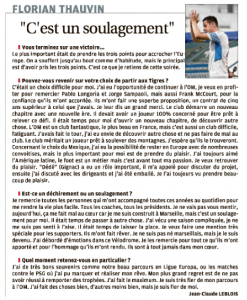 Wanting to try something new, he explained why Mexico: “I had the option to stay in Europe with many approaches, but the most important for me is to take pleasure. I’ve always liked Latin America. Football is a job but it’s first and foremost my passion. I want to find pleasure again.

“Gignac had an important role, he called me to talk about the project. Then I talked to the owners and I was sold. I always saw him take pleasure in what he did”.

So, pleasure over competition for Thauvin, and perhaps after many years at a club he described as ‘fantastic but tiring’, he just needed a break.

It’s also worth pointing out that his stay in Mexico could be brief, as La Provence previously reported he had negotiated clauses in his contract with Tigres that would allow him to leave at the end of every season.

That means both Crystal Palace and West Ham could have another go next season if they so wish.