In an interview with Business Insider earlier this month, Manchester United striker Romelu Lukaku revealed he could retire from Belgium after the 2020 European Championships.

The 25-year-old, who made his debut for the national team eight years ago, was part of the Belgium squad that lost to eventual winners France in the semi-final of the 2018 World Cup.

Belgium manager Roberto Martinez has admitted that he “understands” the decision taken by the former Everton man on his future.

“I think I understand Romelu. He sets himself a goal in the very short term. He wants to give the next two years everything. I am convinced that he now feels that’s true. But whether it will be so in two years? You know, he wants to win,” Martinez told Belgian newspaper De Standaard. 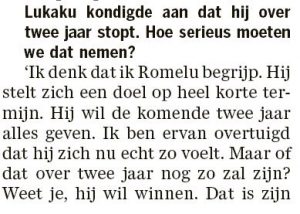 Lukaku’s club and country teammate Marouane Fellaini had also admitted earlier that he would take a decision on his Belgium future after the World Cup. The midfielder has now decided to continue representing his country and the same could happen with the Manchester United attacker in two years.