If there are two players who have caught the eye this season at Everton, it’s Dominic Calvert-Lewin and James Rodríguez.

The first of the duo has been at the club since 2016, when the Toffees spent £1.6m on him from Sheffield United, and while it took him some time to get going, the 2020-21 season has been the one where everything clicked for the striker.

So much so that he’s now got three England caps to his name, as well as two goals, all the while scoring 11 in 12 appearances in all competitions for his club.

As for the Colombian, who arrived on a free from Real Madrid, there have been few complaints on the blue side of Merseyside about his big move, especially since he has taken to Premier League football like a duck to water.

Among those to be glad of the coup is Abdoulaye Doucouré, who had a bit to say about Everton’s surprise star arrival in an interview with Onze Mondial.

He said: “I think Real Madrid made a mistake by letting him go. I was able to talk to him. He told me Zidane had his starting XI, and it was hard to break in. Real Madrid have a lot of great players, but James is a magnificent footballer. He has everything. I understand why they paid €80m for him. 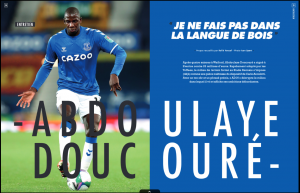 “He had a good spell at Bayern Munich even if he wasn’t kept. Sooner or later, he’ll return to a very big club, because he’s got great qualities. He was just lacking minutes and confidence. This year, he’s at his level, he’s good mentally and physically.

“He’s also with a manager who knows him well. We all benefit from it. I’ve always dreamt of finding myself with great players. These days, that’s the case. I hope it’s not going to stop there”.

Since his arrival at Goodison Park, James Rodríguez has scored two goals and assisted another four in 10 appearances in all competitions.