Continuing a long tradition of promoting youth players to the first-team, Lyon’s decision to start playing Houssem Aouar on a more regular basis is one they are yet to regret.

The young midfielder has gradually established himself as a regular starter under Bruno Génésio, and Lyon are yet to lose a league game in which he has started this season.

However, things could have been very different had he accepted advances from Liverpool, who expressed a strong interest in him before he signed a professional contract with Lyon.

Revealing his reasons for turning down what is now Jürgen Klopp’s side in an interview with L’Equipe, the 19-year-old makes a pretty strong case.

He said: “Since I was a kid, I wanted to play for Lyon. Even if there were approaches, my childhood dream came before everything. I was born in Lyon, that’s where I grew up, saw my elders succeed. I play for the club of my heart, so I’m in my dream.” 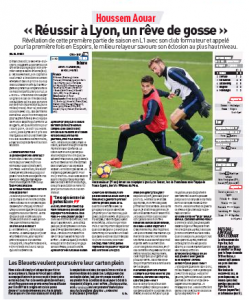 Furthermore, Aouar is extremely well surrounded in the French city, with his family cocoon helping him stay grounded.

He continued: “They’re very, very important. I still live with my mum. It’s dear to my heart and I’m even pride of it. She’s done everything for me and I feel so at home there. Playing in big games with the cameras on me, it’s important so that I don’t get carried away.”

Of course, had he moved to Liverpool, there’s every chance his mother would have gone to Merseyside with him, but he wouldn’t have been playing for the club of his dreams.

This, of course, means Liverpool have missed out on two young French midfielders over the past few years, with Maxime Lopez also choosing to play for his childhood side, Marseille, instead of following in Steven Gerrard’s footsteps.