Newcastle United’s efforts to strengthen their centre-back position in the winter market saw them end up taking Dan Burn from Brighton & Hove Albion.

Prior to brining the 29-year-old back to St James’ Park, the Magpies had shown interest in other players, like Sevilla’s Diego Carlos.

The Tyneside club made an “important” offer to acquire the Brazilian’s services, but were unable to convince the La Liga side. This was confirmed by their sporting director, Monchi, who also admitted the Premier League side’s interest had affected the defender.

Wednesday’s edition of ABC Sevilla have published an interview with Carlos, and part of the discussion with the player was focused on the attempts made by Newcastle to sign him.

“I was always very calm, I have a commitment, my contract here at Sevilla. Nothing ever happened in my head nor did I go crazy with the situation. With everything that was talked about, I was working and competing, I think I did well,” he said. 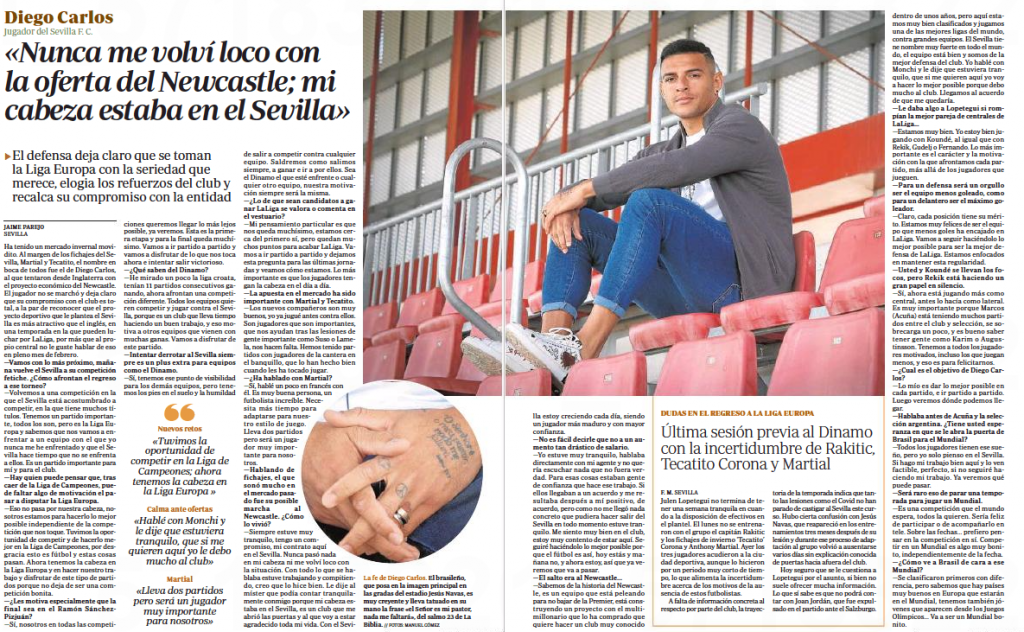 “I told the coach that he could safely count on me because my head was at Sevilla, it is a club that opened doors for me and to them, I will be grateful all my life. At Sevilla, I am growing every day, being a more mature and confident player.”

Carlos would have improved his wages, had he decided to leave Sevilla for Eddie Howe’s side in January. He was pressed on whether it was easy to ‘say no to such a drastic increase in salary’.

Responding to that, the South American explained: “I was very calm, I spoke directly with my agent and I didn’t want to hear anything that wasn’t true. For those things there were trustworthy people who do that job.

“If they reached an agreement and it turned out to be positive for me, fine, but since nothing concrete came to me that could make me leave Sevilla, at all times I was calm.

“I feel very good at the club, I’m very happy to be here. I will continue to do my best because football is like that, today you are there and tomorrow you are not, and now I am, so we will see what will happen.”

On Newcastle, Carlos further went on say: “We know about the history of Newcastle, it is a team that is fighting not to drop out of the Premier League.

“They are building a project with the billionaire, who has bought them, who wants to make [them] a well-known club in a few years, but here we are very well classified and we play one of the best leagues in the world, against great teams.

“Sevilla have a very strong name around the world, the team is doing well… I talked to Monchi and told him to be calm, that if they want me here, I’m going to do my best because I owe the club a lot. We came to an agreement that I would stay.”

The summer may be a different story.