Home Europe “If I score a hat-trick, he asks about misplaced passes” – Player...
SHARE

Bruno Fernandes has been something of a revelation for Manchester United since signing for the club in the last winter market. The Premier League side had been linked for around a year and that brought greater focus on the player’s performances in Lisbon.

It was clear to see that not only is Fernandes hugely demanding of himself, but he acts the same way with teammates and isn’t afraid to point out faults and where things can be improved.

Just the type of character that was needed at Old Trafford, it’s something which Sporting have missed since their former captain left the club.

However, despite being at Manchester United, Fernandes continues to follow Sporting closely and continues to be demanding of the players there.

Joao Palhinha spent Fernandes’ last season on loan with SC Braga but is still close to the player.

In a lengthy interview with Record, the Portuguese newspaper asked about their friendship, and the Sporting player explained the demands the United player still makes: “Bruno is more ‘tearing’ than praising (laughs). Even if I do a hat trick, he asks if I 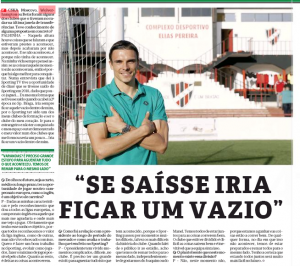 misplaced passes. It is demanding in a good way. From what they tell me, he always wants to know everything about Sporting.”

That kind of attitude is helping Bruno Fernandes succeed in England, and Palhinha has his own ambitions to move to the Premier League in the future.