Coming through at Marseille, Maxime López looked like he was going to stay at his childhood club for a long time once he finally broke into the first-team.

After all, he had already turned down advances from some bigger clubs, such as Liverpool, who came knocking on his door at a young age.

This is something he talks about quite a lot when interviewed, and Thursday’s chat with Gazzetta dello Sport was no different.

The player, now at Sassuolo after things didn’t quite work out at Marseille, is being talked about because of his performances in Italy, with Maurizio Sarri taking an interest in his services at Lazio too.

Either way, Gazzetta didn’t waste time to ask him about the times he came close to signing for both Liverpool and Barcelona, which he was more than happy to talk about.

He said: “I am making my way. I said no to Liverpool: they offered me the contract, but I was 16 and didn’t feel like leaving home. So I stayed at Marseille. Years later, it seemed that Barcelona wanted to take me. I am a Barça fan, it would have been a dream, but it went differently.” 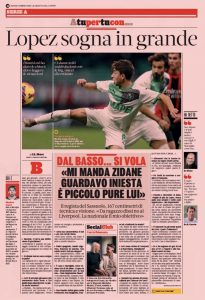 As we’ve said before, this isn’t the first time he’s discussed the Anfield side trying to sign him, previously stating that Liverpool did ‘everything’ for him to sign.

That included meeting Steven Gerrard after a game, and telling him they were prepared to give him Coutinho’s spot in the team down the line.

It shows just how badly Liverpool wanted him, but, in the end, he chose a different route, and one he seems rather happy with.