Manchester United defender Matteo Darmian has expressed his desire to return to the Serie A, three years after joining them from Torino.

Since Jose Mourinho took charge at Old Trafford two years ago, the 28-year-old has seen his first team opportunities being limited.

He has now urged the Red Devils to sanction his sale in order to get regular playing time, wanting to ensure he keeps his spot in the national team.

“I want to play more and to do that, I am ready to leave Manchester United. [It’s my] dream to return to Italy. I want to go back to Italy,” Darmian told Italian newspaper Libero.

With the transfer window in Italy closing today, the versatile defender is aware it would be “hard” for him to leave the 20-time English champions. He said, “Hard to say, but sometimes things can change even at the last hour. Let’s see what happens.” 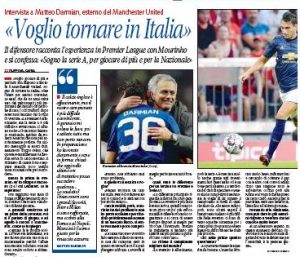 “Juve were interested in me and I was delighted to know about it. I don’t know sincerely why the deal has not been concluded. I felt seduced and abandoned,” he added.

Numerous reports suggest the relationship between Jose Mourinho and Paul Pogba is strained. During the course of the interview, the Red Devils player was asked about these rumours.

“They have mounted a case on nothing. Paul is critical for the United, and will be for a long time,” the Italian said, while stressing that his own relationship with Mourinho was “good” and he “never had any problems” with his manager.

An exit, at this stage, especially with both Diogo Dalot and Antonio Valencia injured, would definitely be a surprise.

“When the right time comes, I’ll decide to leave” – Celtic...