Thiago Alcântara was linked with clubs in England and Spain after the German media made aware in mid-2020 the midfielder wasn’t planning to sign a new deal at Bayern Munich.

With less than a year left on his contract, the Bavarian club sold him to Liverpool last September.

The 29-year-old is currently on international duty with Spain and this allowed AS to sit down for a long chat with him.

Thiago started his career at Barcelona and then went to spend seven years at Bayern before joining the Reds last summer.

AS quizzed the player if he had an option to return to La Liga instead of joining Liverpool. Responding to that, he said: “I had options to return, but it was clear to me. Leaving Bayern was to be able to live the experience of the Premier League, a very competitive league.”

“When I got the call from the coach and the club, it was an easy decision to choose the destination, but it was difficult to choose if I really wanted to leave Bayern. In the end it happened and I am very happy.”

Thiago tested positive for Covid-19 in his first month in England and then suffered a knee injury in October, which forced him to spend time away from the pitch until the end of December.

The Spain international is yet to experience playing in front of the home supporters at Anfield. Jürgen Klopp’s man stressed it’s not just the absence of fans in the stadium, but his day-to-day activities in a new country that has been impacted due to the pandemic.

“It is a change of country, club, stadium and you have the expectation not only of seeing the fans in the stadium, and it will be beautiful to see Anfield full, but also the experience of learning day by day about this new country,” Thiago explained. 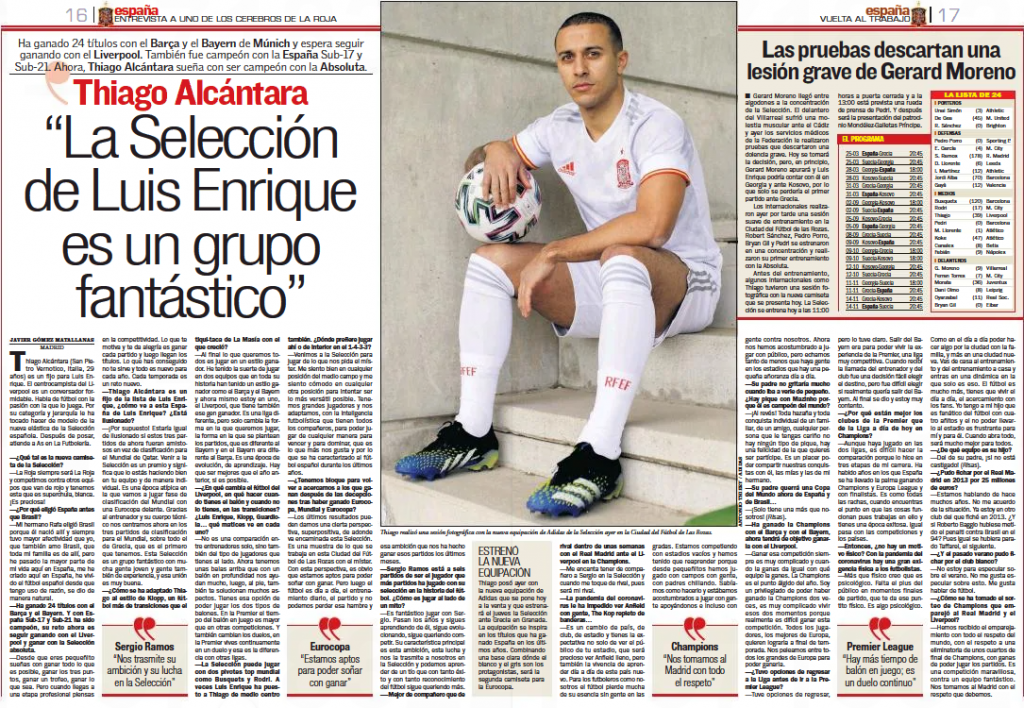 “For footballers like us, football loses much of its essence without people in the stands. We are competing with empty stadiums and we have had to relearn because since we were little we have played with people, with screaming parents.

The international fixtures will see Thiago play alongside Sergio Ramos with La Roja. In a few weeks’ time, the two will be facing each other when Liverpool take on Real Madrid in the Champions League.

“It’s great to play with Sergio. The years go by and you keep learning from him, he keeps evolving, he still wants to compete, his main feature is this ambition, this struggle and he passes it on to us in the national team and we can learn from a guy who with so much success and with so much recognition in football still wants more,” Thiago said about Ramos.

“I love having Sergio in the national team as a partner and when we are rivals, then he will be my rival.”

The Champions League is the only competition Klopp and his men can realistically win this season.

When asked how Liverpool received the draw against Real Madrid, Thiago explained: “We have received the match with all the respect in the world, with respect for a knockout of a Champions League quarterfinal, wanting to be able to play the matches.”

“It is a wonderful competition, against a fantastic team. We face Real Madrid with the respect we owe.”