Home Premier League Chelsea “I am open to it” – Chelsea player sounds keen on transfer,...
SHARE

Matt Miazga has made a handful of appearances for Chelsea and those came just months after he arrived at the west London club in January 2016.

The Blues took the 24-year-old from MLS side New York Red Bulls, but he has failed to convince Antonio Conte, Maurizio Sarri or Frank Lampard at Stamford Bridge.

Hence, the defender has been out on loan since 2016, and last summer, the Premier League side allowed the USMNT centre-back to join Anderlecht on a loan deal.

Since arriving in Belgium, the Chelsea man has missed only two league matches for Vincent Kompany’s side.

Het Laatste Nieuws had a chat with the player and asked for his reaction after presenting 10 different statements. The first statement was ‘Miazga will also play football for Anderlecht next season’.

Responding to that, Miazga said: “In any case, I am open to it. I play here every week, the competition suits me, the atmosphere is good and life is pleasant. It helps that everyone speaks English. So, I would definitely like to stay, but it also depends on what Anderlecht and Chelsea desire.”

Anderlecht don’t have an option to extend the Chelsea defender’s stay beyond this campaign.

With Miazga sounding keen on another spell with the Belgian side, they will have to negotiate another deal with Lampard’s side to take the player back later in the summer.

Despite having limited opportunities to play for Chelsea, the American insisted he doesn’t regret moving to Stamford Bridge. 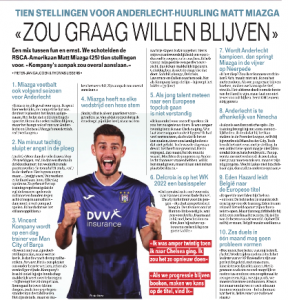 “I can only speak for myself: I would do it again. I was barely twenty when I went to Chelsea. Who misses such an opportunity? I had a lot of confidence, thought I could make it there, but because of circumstances that did not work,” he explained.

“Nevertheless, the step was valuable: it shaped me. It is my path, that makes it worthwhile. If the young people at Anderlecht have any questions about that, I want to advise them, but I cannot decide in their place.”