Arriving from Roma late during the 2013 summer window for a fee of around £27m, Erik Lamela hasn’t been the huge success story many expected him to be, yet he hasn’t exactly disappointed either.

Taking some time to adapt to English football, the now 25-year-old became a key part of Mauricio Pochettino’s Tottenham side during the 2015-16 season when he scored 11 goals and picked up 10 assists in 44 games.

Then injury struck the next season, and Lamela has only recently come back from spending over 400 days on the sidelines.

Speaking to Gazzetta dello Sport, the forward revealed that after his first season at the club, one which saw him work under two different managers in André Villas-Boas and Tim Sherwood, he could have left the club.

But he didn’t, and that’s in great part down to Mauricio Pochettino. 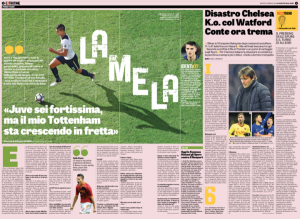 He said: “He’s from Argentina and understands that it isn’t easy for a young kid who comes from far away to get used to a country with a different culture. I had many problems at the beginning: language, injuries, different football.

“After my first year, some people told me ‘Erik, change, leave England’. I never gave in. For me, this was a challenge. If I’m still here, it means I was right.”

Since his arrival at the club, Lamela has been linked numerous times with a return to Italy, mostly to Inter, but it’s never really been a plan of his.

He explained: “When I play, I think about where I am, and I’m happy at Tottenham. Over the past five years, we’ve created a good group. The squad is improving and I live in a city I adore.”