Last week, when Sheffield Wednesday were preparing to face Wolverhampton Wanderers for the Championship, several reports came out saying this could be the end of the line for Carlos Carvalhal in case of a defeat.

The Owls did lose to Wolves 1-0, but the manager seems to remain strong so far, with no major signs that he will be leaving Hillsborough anytime soon.

Now Carvalhal has given one of his frequent interviews to the Portuguese press, and claimed that he’s never been really afraid of losing his job at Wednesday.

Speaking to A Bola this Tuesday, he said: “Honestly, I never felt my head was on the block in Sheffield. I have an excellent relationship with chairman Dejphon Chansiri, who knows well the problems that affect the team.” 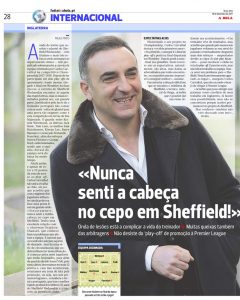 “It’s natural that the results are below the desired level, but there are a number of circumstances that may influence this situation. Starting with the nine players that I have injured, besides the matter of not having VAR, because at this time we should have another 12 points and, if this happened, we would be in a zone of fighting for promotion, that is, in the first six places.”

After talking about the failed attempts to get promotion, Carvalhal answered if it’s still his ambition to train a Premier League club one day.

“I believe that I can reach this level as a follow-up of my work in England. That was already possible, but it did not materialise because I agreed to remain on the Sheffield project. But I confess: I’m also not obsessed with it.”

The manager also spoke about Wolverhampton, which he claims to be the best Championship team he’s seen since taking a job in the league back in 2015.

He said: “It’s the best team in the last two and a half years, it’s a well-organized team with great dynamics, high-quality players and it’s with total merit that they occupy the first place.

“You have to keep this consistency and can even go up directly to the Premier League. With Ruben Neves, Diogo Jota, Cavaleiro and Helder Costa, it’s not only the money that makes the team, but the raw material.”