Home Premier League Chelsea “I miss him very much” – Player proud of friend’s transfer to...
SHARE

Chelsea agreed a deal to sign Hakim Ziyech from Ajax way back in February, with the player then moving in the summer window. It was considered a good piece of business from the Blues, as they secured the transfer way ahead of when deals are usually done.

Frank Lampard went on to bring several other players in during the last market, and he’s still trying to gel them together to give the greatest benefit to Chelsea.

Unfortunately for Ziyech and his new club, he’s missed most of the season so far with a knee injury. Slowly returning to action, he played 18 minutes in the Premier League against Southampton at the weekend, before getting around half an hour in Tuesday’s Champions League match against Sevilla.

Ajax face Liverpool in the European competition on Wednesday and Noussair Mazraoui has been speaking to De Telegraaf. The versatile player, who can operate in defence or midfield, was close to Ziyech at the Dutch club and was asked what pieces of advice he’s picked up from his friend.

De Telegraaf quote Mazraoui as saying: “There are really quite a few. An important lesson, for example, is that I must always believe in myself. In addition, I have to remember that I do it for myself and no one else, so that I constantly have to get the best out of myself. And he emphasises that opinions will always be formed about me. No matter how well I do. I am not allowed to worry about it and Hakim especially has to stay close to me.” 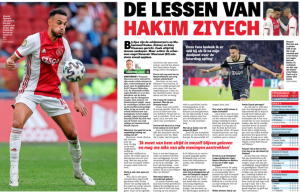 On how much he misses him, and what he thinks of Ziyech’s move to Chelsea, Mazraoui added: “I miss him very much. Of course his qualities in competitions and training, but also his personality, presence and conviviality. Teasing each other a bit outside of training and competitions. Fortunately, we are still often in touch. And of course I am very proud of him, just as he says he is proud of me. That confirms that I am on the right track and gives me a lot of confidence.”