Now at Hellas Verona, he has only conceded one goal in four league matches, as his side share the best defence along with AC Milan this season.

Silvestri had a lot to say about his current form, and was also asked about his past at Leeds United, where he lived important years of his career.

“It was a good experience from a professional and human point of view”, Marco Silvestri told Tuttosport.

“I trained and improved. When I think of England, I miss having less pressure. Across the Channel there’s more serenity and balance, especially in the judgments on young people. And that’s why in England they launch more than us.”

Marco Silvestri joined Leeds United on a €500k deal back in 2014, and stayed at Elland Road for three years, until leaving for Hellas Verona in 2017.

He used to be a regular starter for the Whites in his first two seasons at the club, and that’s why he made 98 appearances for them. He ended up losing his place in the 2016/17 season, which is when he left to return to his home country. 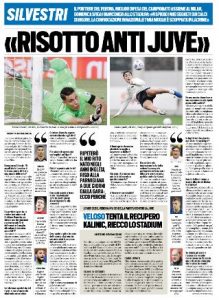 Silvestri never got to work under Marcelo Bielsa, who only arrived at the club in 2018, but he’s still in contact with his teammates, and knows the big impact the manager has been having at the club.

“We’re talking about a coach who has a worldwide charm, a bit like Mourinho. I’m still in contact with some of my former companions and I let them tell me. They say that Bielsa is very manic, the days with him are long: sometimes they even have 3-4 meetings a day and the workloads are heavy.

“When things go well and you win, it’s all great. In times that are a bit more complicated, as it has sometimes happened to him in the past, let’s say that everything becomes a bit heavier. It would have been nice to work with Bielsa.”