Club Brugge star Charles De Ketelaere has admitted he would sign for Chelsea if they were to come calling for him.

The youngster is one of the highest-rated prospects in Europe, having established himself as a key player for the Belgian side over the last year or so.

With a record of 17 goals and 17 assists in 98 games by the age of 20, including ten goals and seven assists in 27 games this season alone, De Ketelaere has all the big clubs in Europe watching him.

Indeed, he is already being linked with a big move away, with several top Champions League sides thought to be keen on his signature.

At the moment, that hasn’t happened, but the rave reviews keep coming in and, sooner or later, somebody is going to listen.

Recently top scout Paul Courant was insistent that the youngster could play for any team he likes, even at this early stage of his career, and claimed De Ketelaere could sign for Chelsea tomorrow if he wished.

That was a subject that was put to the striker in an interview with Het Laatste Nieuws, and he gave Chelsea hope, should they ever move for him.

“In soccer, you have to listen to everyone,” he told them.

“That’s what I’m going to do, too, if I have to make a choice. If tomorrow an absolute top club wants me, I might decide to sign there. 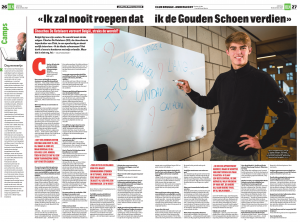 “Everything is possible. I’ll just let it come to me. Because I don’t live in the future, I live in the now.

“But it’s not that during Real – Barcelona I think: ‘I want to play there later’.

“I don’t put those things in my head and I’m certainly not distracted by them. That’s just the way I am.”