Home Premier League Crystal Palace “I would have liked it” – Player opens up about failed Crystal...
SHARE

For the Italian press, the fact Christian Kouamé never made it to Crystal Palace and ended up at Fiorentina instead is a big deal.

We say this because whenever the young Ivorian sits down for an interview or a press conference, someone asks him about it, and his chat with Gazzetta dello Sport for their Wednesday edition is no different.

Four questions in, the fact he didn’t move to Selhurst Park because of a serious knee injury is brought up.

About the whole situation, Kouamé said: “I don’t have any regrets. I should have gone to the Premier League and I would  have liked it because English football is one I’m passionate about, but I injured myself. Destiny wanted it this way”.

Rather than leaving Genoa for London, the player was sent on loan to Fiorentina until the end of the season, where the club have an obligation to buy him with certain conditions. 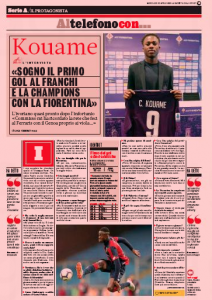 It’s expected he will be there for the foreseeable future, meaning any chance of making it to the Premier League will have to wait.

Prior to his injury, the 22-year-old had been in good form for Genoa, scoring five goals and picking up three assists in 11 appearances, which is exactly why Crystal Palace were interested in him in the first place.

Still, there’s plenty of time for him to get his move to England’s top-tier down the line, and perhaps the Eagles will come back in a year or so to give it another go.