Easily seen as one of the more successful managers to have graced a touchline in the past 20 years or so, Carlo Ancelotti was also once a player.

Currently in charge at Everton, the Italian was, in his past career as a footballer, a well-respected central midfielder who played in his home country throughout, featuring for clubs such as Parma, Roma and Milan.

Well known to be associated with the San Siro club due to his time there as a manager (eight years), he also played five seasons for them towards the latter years, where he ended up facing a certain Diego Maradona.

The Argentine was at Napoli at the time, and with him celebrating his 60th birthday, France Football dedicated a whole magazine to him this week, where they got other greats to talk about the phenomenon.

The likes of Zinedine Zidane, Cristiano Ronaldo and even Kylian Mbappé all gave their thoughts on the current Gimnasia de La Plata manager, and so did the Everton manager.

He said: “He’s the greatest player I played again, including in his behaviour. Total respect. I kicked him like nobody else, because I wasn’t able to contain him, but he never complained once. I keep excellent memories about him. I know he had problems in his career, but he a really good guy and a fantastic player. 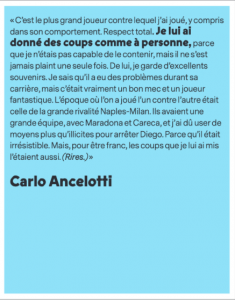 “The time we played against each other was the one of the big Napoli-Milan rivalry. They have a great team, with Maradona and Careca, and I had to use more than illicit means to stop Diego, because he was unstoppable. To be honest, the hits I gave him were too (laughs)”.

You probably wouldn’t be able to get away with such a tactic nowadays, but that’s the beauty of looking back on those times, and it seems the Everton manager is somewhat nostalgic of it all.

Then again, he also appears to have embedded some of his tenacity as a player in the current Toffees squad, what with them getting a few red cards already this season.