Home Premier League “I have my ideas” – Tottenham player suggests there’s more to his...
SHARE

Tottenham Hotspur midfielder Mousa Dembele made four appearances for Belgium at the 2018 World Cup, which included two starts, one against Panama and the other one in the semi-final defeat to France.

In Saint Petersburg, against Les Bleus, the north London club’s player had a disappointing time on the pitch and was replaced by Napoli’s Dries Mertens after 60 minutes.

The Tottenham man started the match and was one of the standout players on the pitch in Glasgow as Belgium sealed a 4-0 win.

Het Laatste Nieuws explains the contrast between his performances against Scotland and the World Cup winners, while Dembele himself suggested there was more to the France performance than meets the eye. 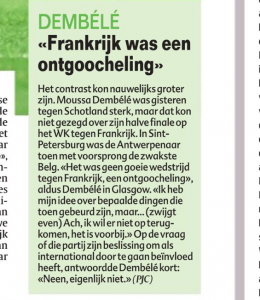 “It was not a good match against France, a disappointment. I have my ideas about certain things that happened then, but … (silence for a moment). I do not want to talk about it,” Dembele was quoted as saying by HLN.

When asked if he contemplated announcing his Belgium retirement after the World Cup, he said : “No, actually not.”