Home Premier League Everton “I go to his office and we talk” – Everton star reveals...
SHARE

Richarlison and Marco Silva are something of a double act.

Working well at Everton, the pair did the same at Watford before the manager was edged out after talking to the Toffees about moving to Goodison Park during the last season.

The Brazilian’s move to Everton and a couple of eye catching performances helped him get in the national squad and he did well once again, even without someone who he now refers to as his ‘father’ in football.

Portuguese newspaper A Bola sent someone to speak to the Everton player in Brazil and it’s clear just how close he is to his club manager.

“Marco Silva has helped me a lot,” explained Richarlison. “He’s a very organised coach who demands a lot of his players, he’s always on the training pitch to show us how to do things. When I need some additional explanation I go to his office and we talk, it helps me a lot on the pitch and not only from a tactical point of view.”

It’s good for Everton fans to hear, with the attacker committed to giving his all for his manager: “I see Marco as a father, he came to Brazil to bring me to England and to help me realise the dream of playing in the Premier League.” 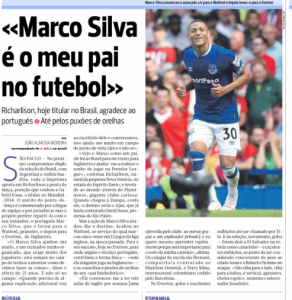 Richarlison had been set for a transfer to Ajax, until Silva became involved, and the Everton boss is doing everything to adapt his player to England and the football here: “He convinced me to have three English lessons a week and I really want to learn quickly because it will be important for the rest of my career.”