Only one footballer can claim to have played for Arsenal, Tottenham, Real Madrid and Manchester City in their career, and that’s Emmanuel Adebayor (if there’s anyone else, please let us know).

The veteran striker came out from his small football break to play for Medipol Basaksehir in Turkey last January, scoring seven goals in 16 appearances last season, and five in 15 so far this campaign.

Never afraid to speak the truth, the former Gunner is always good interview material, and So Foot had a long chat with him about his career, which includes *that* celebration against Arsenal just after transferring to Manchester City.

While he’s been asked about this many times in the past, never has the striker given such an in depth description of what went through his head during that particular moment.

‘Q: For your first game for Man City against Arsenal, you score and run to the other side of the pitch to celebrate in front of the Gunners’ fans. Why that moment of madness?’

“A: The adrenaline. Afterwards, I got told the English FA wanted to give me a nice fine, but even if I would have had to pay €2m, considering what I went through, I would have still done it.

“When I start to run, Wright-Phillips tries to catch me. He’s small, so a shoulder barge sends him flying. Then there was Barry, very slow: a quick juke move and he’s left behind. Around the centre circle was Kolo Touré, and he quickly realised it was better to just let me do my thing. 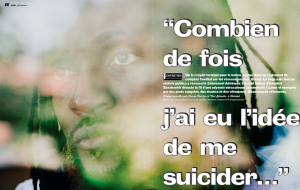 “When I slide on my knees, arms wide in front of the fans, I felt untouchable. People were throwing everything: phone, bottles of water. I never flinched. Everything flew past me. Pew, pew, like in the movies!

“It was like having a sensation of being in prison for so many years and suddenly being told: ‘Brother, take the door and leave. Now, you are free’. That’s what I felt, a deliverance.”

Told all of a sudden by Arsene Wenger that he wasn’t part of his Arsenal plans anymore, most likely because of Robin van Persie, the former Togo international had to bounce back on his feet somewhere else, and that so happened to be Manchester City, who wanted to build a team capable of winning the Champions League.

He knew he would ‘never win it with Arsenal’, so why not?

Not surprised the club are now in the Europa League, it seems any love Adebayor could have had for the Gunners has now disappeared completely.

A shame, really, considering he managed to score 62 goals in 142 appearances for Arsenal, but when your manager tells you he doesn’t want you anymore, what choice do you have but leave?