Home Europe “I felt that I was disrespected” – Player speaks after Rangers exit...
SHARE

Fabio Cardoso, who left Rangers in July, has given a pretty long interview to Portuguese newspaper A Bola.

The 24-year-old joined the Ibrox side on a €1.7m deal from Vitória de Setúbal in 2017 and left for free this summer, but had a lot to say about his time at the Scottish club, and seems pretty happy about his season there, even if he wasn’t to get a future under Steven Gerrard.

Cardoso is currently playing for Santa Clara, a club based on the Island of São Miguel, very far from Lisbon. Cardoso claims that the accent people have there makes him remember Scotland.

“It’s tricky, especially when older people talk fast. I have two or three Azoreans in the team, but I notice that they slow down when they are talking to a teammate that is not from here. Otherwise, we would not understand anything…”, Cardoso told A Bola.

“It’s almost as difficult as the Scottish [laughs]. In Scotland it was difficult because it sounded German. When our kitman – who had been at the Rangers for a long time – spoke quickly, we couldn’t understand anything. He had to repeat three and four times and yet it was difficult.” 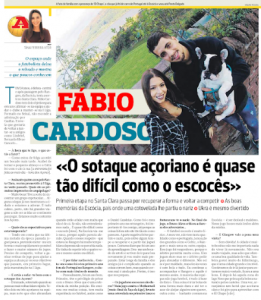 Asked about his year at Rangers, Cardoso claims that it was pretty positive, despite his early departure.

“Personally, it was a good year. First, I had the privilege of playing with Bruno Alves, who’s a reference in my position. He taught me a lot of things, he has a lot of experience in football, like Daniel Candeias. As it was my first year abroad, it was important to have them with me, even because things out there are not as easy as they seem.

“The negative part was to have broken my nose, because I took some time to recover and from there I played little. I used to say it was a year of learning. It gave me a lot of stuff and if I have to go out again I’m going to be much more prepared. Being away from family and friends is tricky when things go well, but when things go wrong it’s even worse. But that is what prepares us.”

On the reason why he left Rangers, Cardoso said: “It had essentially to do with the sporting part in personal terms. When I broke my nose, I’d been waiting for surgery for a long time, because of the transition of managers – Mr. Caixinha was eventually fired – and I felt that I and other colleagues were off for no good reason. I felt that I was disrespected and it was difficult not to be playing. I wanted to feel happy, to assert myself again. I did’t play in the second half of the season which is the most important time.” 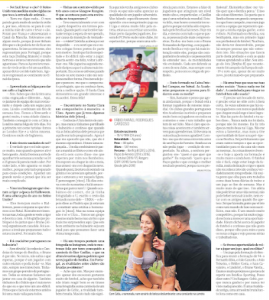 Breaking his nose was a hard blow for him, and he talked a little more about the violence in Scottish football: “Scottish football is very physical. In my opinion, it doesn’t have as much quality as the Portuguese, with the exception of the greats like Celtic, Rangers and one or another team. That game was embarrassing because the referee allowed many things. They play hard but if the referee asks to slow down it’s different.”

“I don’t know if it’s out of spite, but sometimes it’s no ball and all. I keep following the Rangers and that’s just the way it is. Most teams don’t play football, it’s all based on the physical. It’s one thing to go to balls harder and to have the bad luck of injuring someone unintentionally, another thing – quite common in Scotland – is to be disloyal and mean. In that game there were more injuries than mine.”

But despite that problem, the player insists that he loved his time in the Scottish Premiership, and would be happy to live in Glasgow once again: “No doubt! The city is very beautiful and I wouldn’t mind at all about living there again. I’m not very traveled, but I think it offers a good quality of life. I also really enjoyed Edinburgh, which is a big and amazing city. We would like to go out to dinner to be more at ease, it was an hour drive. And then there is that area of Loch Ness that excels in natural beauty and castles.”