Portuguese newspaper Record today features a piece on José Mourinho’s work for the community during the Coronavirus pandemic.

As the manager had been helping in the club’s Kitchen Garden by transporting fruits and vegetables, he talks about the importance there is of getting involved.

“I don’t like to talk about what I do at that level, either now, at this stage when Covid hit us, or before the tragedy,” José Mourinho told Record.

“I do it, I’m as discreet as possible and I don’t come to the media to proclaim what I did, unless the public exhibition of my intervention helps to develop more solidarity actions. It’s a principle that both me and my family continue to follow.

“I felt the click right at the beginning, when the first quarantine was imposed, the first total closure and it became clear the economic and social impact that the pandemic would have on society, with a special focus on the most disadvantaged population. But it’s something that immediately became evident to me: there are going to be a lot of people suffering.” 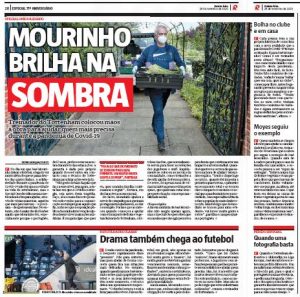 Asked about the difficulties that football has been through doing the pandemic period, Mourinho said: “Football was and is struggling to survive. I speak of football in general, not just the rich Premier League. There are many people ‘dying’ in football, there are many people in football earning normal salaries, similar to those of many other professions.”

José Mourinho also talked about the difference of clubs and the government when helping the people.

“Of course, there are bigger clubs, financially more powerful, and players with personal situations that allow them to be supportive and help those in need. Yes, there is. And I believe that many do an extraordinary job, as happened in my club. But they cannot be demanded to replace the state.”

In the interview, Mourinho also talked a little about David Moyes joining him in the actions and the bubble they’ve been living in the Premier League.

Record were supposed to have a special 71st anniversary edition today, but all the stories are now less important given the attention given to Diego Maradona’s death, which makes their front page.

José Mourinho’s interview was one of these special articles, so we wonder if they’ve left any quotes for the upcoming issues.