If it was up to Kristoffer Nordfeldt, he’d have played for Swansea City against Bristol City on Saturday.

Speaking to Dagens Nyheter, via Metro Sweden, the goalkeeper made it clear a couple of days ago that he feels he’s fit enough to take to the pitch for the Welsh club, but is dependent on the club’s medical staff giving him the all clear.

In his August 16th press conference, manager Graham Potter said Nordfelt would be out for between two and four weeks, and the goalkeeper is clearly keen to return as quickly as possible.

The Swansea player explained: “I can already play this weekend [against Bristol City] if the doctor allows. But myself, I feel ready to play again.”

Nordfelt dismissed any fears he won’t be available for Sweden’s upcoming internationals, 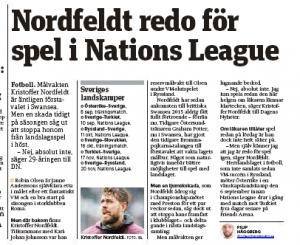 saying there’s absolutely no chance that his injury will mean he can’t join up with the national team.

There’s no suggestion the 29 year old is annoyed with Potter or the Swansea City medical team, he’s just super eager to return and feels fit enough to do so.