Bayer Leverkusen star Kai Havertz has been heavily linked with Chelsea this summer.

The attacking midfielder has managed 17 goals and nine assists in all competitions this season, and he will have an opportunity to further improve the tally when the Europa League resumes later today.

Manchester City midfielder İlkay Gündoğan has explained what Chelsea fans can expect from Havertz, if the Blues end up acquiring the player’s services.

“I expect great things from him. Kai’s potential is unlimited, there are no limits. He brings a lot with him, and now it’s up to him to show off this enormous talent. He has this calm and serenity on the ball, and is a prudent type on the other side,” Gündoğan told SportBild when asked specifically about a move to Chelsea.

Havertz’s playing style has seen him being compared to Michael Ballack, who represented both Leverkusen and the west London club during his playing career. The former Borussia Dortmund man has given his take on this comparison.

“In my opinion, Havertz is even better than Ballack. They are also different types,” the City player explained.

“Ballack stood for a certain basic aggressiveness and mentality on the pitch. A type of player of the previous generation, when you said that you need a tough guy, in a positive sense, on the pitch. That’s not how Kai is.”

Last week, Leverkusen director Simon Rolfes stressed the Bundesliga side have not received an offer from the Blues for the 21-year-old. Earlier reports indicated the German side want to retain the player until the end of the Europa League campaign.

Meanwhile, Frank Lampard’s side have already added Timo Werner to their squad for the next season. SportBild asked Gündoğan what the opinion in England is on the former RB Leipzig player. 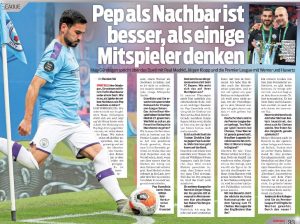 He said: “Believe me: Timo Werner is known to every professional here at City. I was asked about him by many other players, including what type of guy he is. He has earned respect.

“His career is closely monitored. If he is successful at Chelsea, any football fan worldwide will soon know him well.”

Celtic make it clear they won’t accept loan – Want big fee or nothing, ‘difficult’ to imagine club meeting that