Sebastien Haller doesn’t seem like the type of guy who’s going to be too nervous about what’s ahead for him with West Ham.

Moving from Eintracht Frankfurt last week for around €50m, Haller is the big striker signing the Hammers have been trying to sign for several windows. Late efforts to snatch Maxi Gomez from the clutches of Valencia failed, and it was then a case of convincing Haller that West Ham was the club for him.

When the rumours first appeared there was some confidence in the German media that Haller wouldn’t be too keen, and would instead either wait for a move to a Champions League club or stay where he was.

Something convinced him, and the Frenchman has now been talking to L’Equipe about the move.

Asked if he feels pressure because he’s the club’s record signing, Haller answered: “Frankly, not really. I arrive in a world, England, where there are huge sums exchanged in each transfer window. I don’t think I’m getting a huge transfer fee on my side. And all this is part of the game.”

The French newspaper further pushed, and asked about the impact of the €50m fee: “It moves me in the sense that it is a strong gesture on the part of the club. It means a lot of things. It is a very beautiful mark of confidence. This shows that the leaders really wanted me.”

They then wanted to know how he feels about replacing Marko Arnautovic, described as ‘The Hammers’ star last year’: “You know, I’m not someone who follows football news 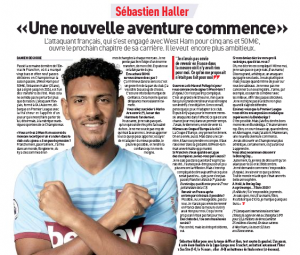 very closely. I don’t care too much about who was there before me. I want to bring all that I can bring, to try to adapt as best as possible, as quickly as possible, and to give back the confidence I am shown.”

Should it all go well then Haller may have a good shout for a place in France’s Euro 2020 squad, to which he said: “If it’s possible, I’ll take it. I am open. (laughs) Well, I’ll have to score some goals by then.”